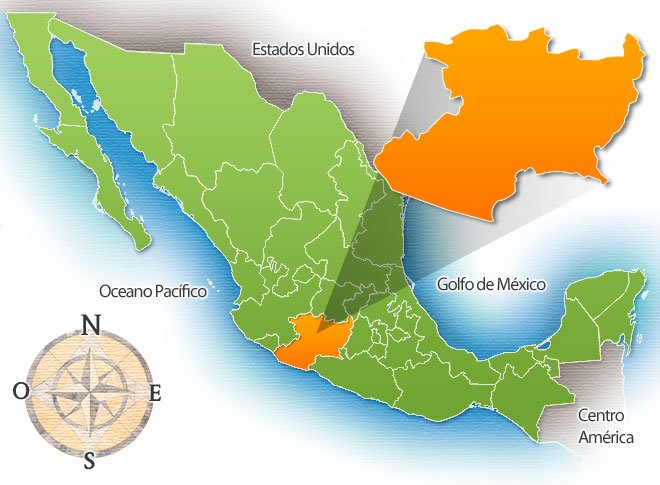 Michoacán is located in the western part of the country. It is a state that, as a result of its geography and natural environment, offers a great variety of landscapes and climates. Michoacán is bordered to the east by the states of Mexico and Guerrero, to the north by Querétaro and Guanajuato, to the west by Colima and Jalisco, and to the south by Guerrero and the Pacific Ocean.

The state is crossed by the Transversal Volcano Axis and its topography is varied, with beautiful mountain panoramas, green plains, tropical coastal areas, and abundant rivers and lakes. Its history and culture are fused, creating an interesting journey for the traveler.

Prior to the Spanish occupation, the lands of Michoacán, which means ¨place abundant in fish¨, were inhabited by an important ethnic and lingüistic group, the Tarascans. In the Mexica language the Tasascans were referred to as the ¨Michoaques¨.

The chroniclers of the early Colonial period referred to the Michoaques as the tarascos, however, the descendents of these people today call themselves the P’urhepecha.

We know little of their origin, just what is described in the Account of Michoacan, in which it is discussed how a group of ¨Chichimecas¨ who called themselves Üacusechas¨, arrived in Michoacán led by the Lord Hiretiticateme.

After a long pilgrimage, they first settled in a place near Zacapu, and later, near what is known today as Santa Fe de la Laguna. Tariacuri, one of the first governors, was able to consolidate rule in Tzintzuntzan, the site of one of the most important ceremonial centers of the Tarascans, especially the ¨Yacatas¨ which were the temples of our ancestors.

The Tarascan Empire was distinguished as being comprised of a warring people whom the Mexicas could never conquer. A muchcelebrated defeat was suffered by the Aztecs (Mexicas) under the command of Axayacatl at the hands of the Tarascans at the frontier of Taximaroa, today known as Ciudad Hidalgo.

Upon the arrival of the Spanish, the Tarascans surrendered peacefully, therefore the conquest of Michoacán was fundamentally spiritual. Nevertheless, with the establishment of the First Court its president Nuño de Guzmán initiated a cruel war against the Tarascans, depopulating the inhabited towns.

Pacification was achieved by the Franciscan evangelists and by Vasco de Quiroga, judge of the Second Court. He arrived in the state in 1533 and, later as the first bishop, he initiated the spiritual conquest of the region, while at the same time fighting against the abuses committed by the Spanish landowners.

As a result of this spiritual conquest there came to be a rich blending of religious beliefs, one example of this being the commemoration of the dead, which is celebrated even today in places such as Janitzio, Ihuatzio, Tzurumútaro, Tzintzuntzan, and Jarácuaro, among others