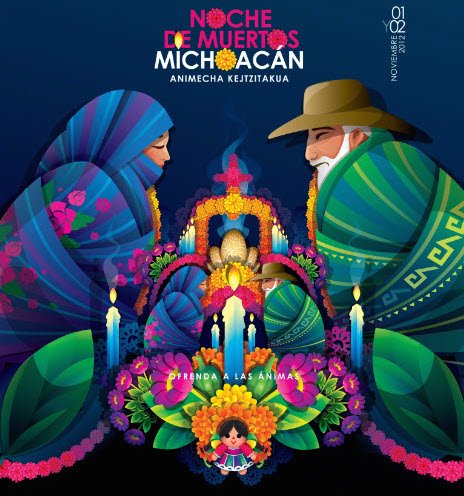 Offerings and altars are placed for dead children on the 1st of November. If it is the first offering, the godfather from the baptism brings an arch, which is arranged with flowers known as cempoalxóchitl or tiringuini- tzitziqui or marigolds and flower of the soul, a type of orchid that blooms this time of year. The arch also has sugar candies in the form of angels or small animals, toys, and even clothing.

The entire family participates in decorating the altar. This is announced with firecrackers during the walk from the godparents’ house to that of the deceased godchild. Those in the procession sing and pray. In the home of the deceased child, the altar is hung. The parents have prepared traditional dishes such as pozole (corn and pork stew), tamales (corn meal cakes), atole (a hot, flavored cornstarch beverage), among others and invite those in the procession.

Very early on the morning of the 1st, the parents and godparents of the child take the offering to the cemetery. They remain there from five to nice AM, at which time they light candles as a remembrance of the light of Christ and they tribute their offering to the child.

The offerings of the “Little Angles” is a tradition that takes place in all the towns around Lake Pátzcuaro albeit with some variations. On the Island of Janitzio, for example, the celebration takes place in the atrium of the church from seven to ten the morning of the 1st and is attended by the mothers and siblings of the deceased children. Beautiful decorations made of flowers adorn the graves, as well as wooden and straw toys. Gifts the children never received while alive adorn their altars during the wake.

In Huecorio the children are remembered in their homes with the placement of altars placed the evening of October 31st. The offerings are lavishly adorned with sweets, bread, wooden toys from Tócuaro, clay toys from Ocumicho, and clothes that the parents have brought from Pátzcuaro.