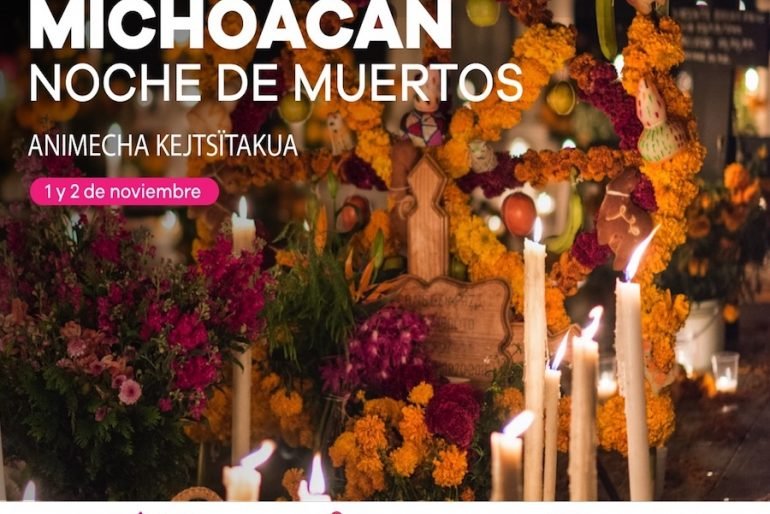 Within the set of cultural manifestations that take place in the State of Michoacán, there are undoubtedly those that have to do with the celebrations framed in what is commonly known as “night of the dead” and that in Michoacán and particularly in the Purépecha indigenous communities , are of particular importance for being one of the ritual expressions with deep significance, beyond its unique showiness.

During previous days and particularly on November 1 and 2 of each year, the pantheons and houses where “waiting” is done are covered with cempasuchil flowers, candles, fruit, bread, incense. Altars and graves are adorned profusely, food and drink is prepared and shared, an offering is brought, prayed, there is a festive atmosphere and at the same time there is a deep sense of community and ceremonial order.

What makes this celebration, permanence of the millenary past itself and appropriation and reinterpretation of other beliefs and cultures, can remain and renewed year after year in what is known as “Animecha Ketzitakua” among the communities: Offering to the Souls.

The Day of the Dead in Mexico has its origins in the pre-Hispanic era, ethnic groups such as the Mexicas, Mayas, Purépechas, Nahuas and Totonacas celebrated it in the ninth month of the Mexican Solar Calendar and was presided by the Goddess Mictecacíhuatl (Lady of Death).

The spiritual conquest imposed by the Spaniards produced an interesting religious syncretism. One of the richest demonstrations of this mix is ​​the night of the dead, where the indigenous concept of death plays with the Christian ideas of “beyond.”

It was believed that the dead needed food to reach their final destination, so that when they died, food, water, offerings and various objects were left next to them. This tradition was mixed and adapted to the Christian calendar on November 1 and 2. November 1 is Todos los Santos dedicated to the deceased children and day 2 to the elderly deceased. It is believed that these days the deceased return to visit their loved ones.

If you want to know the whole history of the night of the dead tradition in Michoacán download the full book:

This 2020, due to the sanitary conditions caused by COVID-19, a series of special protocols were created to achieve a safe celebration for people from different communities and those who wish to witness the celebrations.

This site uses Akismet to reduce spam. Learn how your comment data is processed.