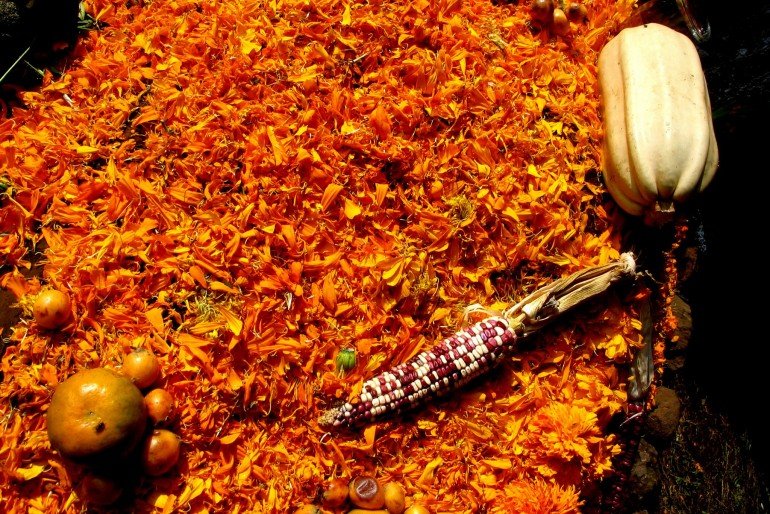 The pre-hispanic concept of the duality of life and death.

Pre-Hispanic people conceived of the universe as a concert of contradictions, a world of dualities necessarily opposite in a game that has as its origin the very existence of human beings.

Within this concept, the Life-Death binomial was considered to be two aspects of the same reality, a consequence of the other, part of a same process of creation-destruction that had given birth to the universe, the world, and humanity. The location to which a person went after death was determined not by the way in which one lived, but rather by the manner in which one died.

The Meso-American world was divided into three planes which constituted a whole in which none of the parts could prevail over the others: the highest part, or the sky; the middle plane, or the world of men, and the lowest part, or the underworld, kingdom of darkness and death.

The Tarascans shared this concept. Their universe, also made up of three parts, was designated as: the Auándaro or Heaven, inhabited by celestial gods or creators represented by the sun, moon, stars, small and large eagles, and other birds. Terrestrial gods lived on Echerendo or Earth. These gods had descended to live among men, and it was they who were present in the hearth of the dwelling or in spirit that lived in the animals of the mountains, in the air, in the water of lakes and rivers, and also in large rocks. In Cumiehchúcuaro, or in the greatest depths of the underworld, dwelled the gods who governed the World of Death.

Each of these planes was divided into five areas: the Center, East, North, West, and South to each of which there was a corresponding color. It appears that to the Tarascans these were: blue in the Center, red in the East, yellow in the North, white in the West, and black in the South. The Underworld, called infierno by the Spanish – in Latin ínferus – which means the lower region, was the equivalent of Heaven or the Christian sky for the Tarascans. They considered it a place of pleasure, but they also believed that in that place darkness ruled. The name designating that place was Pátzcuaro, which was literally translated as “place of darkness”, in other words, the world of death, because night is the death of the sun which is going to rule in the land of shadows.

Pátzcuaro was also considered to be the “door to the sky”, the place through which the gods ascended and descended, and the seasonal seat of Curicaueri, god of sun and fire, to whom offerings were made in this place.

The gods of death were represented by, among others: Uitzume, the water dog, servant of the god of Paradise; Ucumo, a mole that governed the Cumiechuquaro, which the teacher Corona Nuñez theorized could have been another of the regions of the underworld located in the South; Thiuime or “black squirrel”, god of war; the black warrior – like Tezcatlipoca of the Nahuas – with adornments and white feathers who was located to the West; and the Apatzi, or weasel, which could have been located in Apatzingán, as that name translates as the “place of weasels”.

All the animals that live under the surface of the earth were considered to be representatives of the gods of death for the Tarascans, especially because they at the roots of plants, as do moles, causing the death of the plant.

We know little of the religion and rituals practiced by the Tarascans, as the Account of Michoacán or the Escurialian Codex, a writing that describes the customs and ethno-history of the Michoacanos, is mutilated. The first part, which probably described the cosmogony and religion has been lost. Nevertheless, the same Account of Michoacán tells us how the funerary rites occurred based on the death of the Cazonci, their leader. The chiefs of the kingdom adorned the Cazonci with blankets, rich plumage, and jewels.

His body was accompanied by his weapons. In addition, several of his servants were sacrificed. They carried with them the various tools necessary to perform their daily tasks, according to the job with which they served the monarch, in order to continue serving him in the next world. At midnight the procession carrying the body of the Cazonci departed walking toward the “patio of the large guinea pigs” where his body was to be incinerated.

In the morning his ashes were gathered and put into a blanket upon which they placed a turquoise mask, gold ear plugs and bracelets, turquoise and shell necklaces, rich plumage around the head, silver shields, and a sword.

His bow and arrows were interred at the base of the temple of Curicaueri, in a tomb previously arranged with wine and food, arrows, clay jars, clay pots, etc. The large earthen jar in which they used to deposit the ashes of the Cazonci was placed on a bed of wood that faced to the east. This was followed by five days of mourning. The funerary rites were also applied to the other members of the community.

These were given offerings, all the objects considered necessary for the journey, those that allowed for continuation of the person’s vocation on earth, as well as those that conserved the deceased’s social position within the group.

The Colonial Period and the New Notion

The Meso-American religious tradition suffered severe culturaltransformations as a result of the Conquest and subsequent  evangelization. Alfredo López Austin called it the “birthing of indigenous Colonial religions” as the indigenous blended their customs and beliefs with the Christian ones sown in the New World by the conquerors. The newly arrived Spanish priests, who fundamentally emphasized an evangelical conquest, immediately attempted to destroy all the ancient beliefs and practices which were considered to be based on idolatry. Therefore, the gods of death were destroyed, but not the cult to the dead that joined the concepts and practices that both cultures revered.

Catholic funerary rites and customs, as well as the annual homage paid to the dead, were easily accepted by pre- Colombian people, since, in a sense, these coincided with the ancient customs.

It is believed that the Church established the commemoration to the dead on the 2nd of November because the Benedictine Saint Odilón, Abbey of Cluny, fixed upon that date, based on a vision, in order to dedicate it to the “Souls in Purgatory”. It was later approved and implemented by the Pontiffs.

The Catholic ritual to celebrate the dead has consisted, ever since the times of Saint Odilón, in the celebration of masses, suffrages, prayers of various types, responsories to the dead, alms, and Holy Communion, which combine to be the prayers with which the living can help the dead.

However, the Christian concepts of Heaven and Hell, the resurrection of the body and the immortality of the soul, penetrated the indigenous world more through art than through sermons. Theater, sculpture, paintings, and music were the most effective mediums used by the evangelicals to achieve their mission. Thus, we find iconographic examples that allude to these themes in the decoration of chapels and churches in indigenous communities. One oft represented concept in the early days of the Colonial period was that of Hell with its flames embracing and devouring the sinners. The idea was to teach a fear of God and to save the people from committing major sins.

The popular Spanish customs of giving offerings were incorporated into religious beliefs. The Spanish would adorn graves with flowers, and they would leave food offerings including a special bread known as “souls’ bread”. Tombs were illuminated with oil lamps and they said prayers as part of the religious aspect. Bread, fritters and other foods were prepared and then eaten upon conclusion of the celebration.

Thus, indigenous customs were interwoven with those of the Old World to form the Mexican tradition. Of these rituals, the most wide spread has been and continues to be the visit to the cemetery. Also, altars are put up in homes where people put water, candles, flowers, and food, according to what is produced in the region and also the favorite dishes of the deceased.